Barbara Franke receives royal honours for her academic work on psychiatric disorders, ADHD in particular. The professor of Molecular Psychiatry at the Radboud University Medical Center in Nijmegen was awarded Knighthood in the Order of the Netherlands Lion. We cordially congratulate her and are very happy to have her in the leadership team of many EU-funded research projects!

On January 16, Barbara Franke was awarded an honorary Adjunct Professorship at the Goethe University in Frankfurt am Main in Germany. She is the first woman to have received such an honorary appointment among a total of only six scientists appointed in the past 15 years. 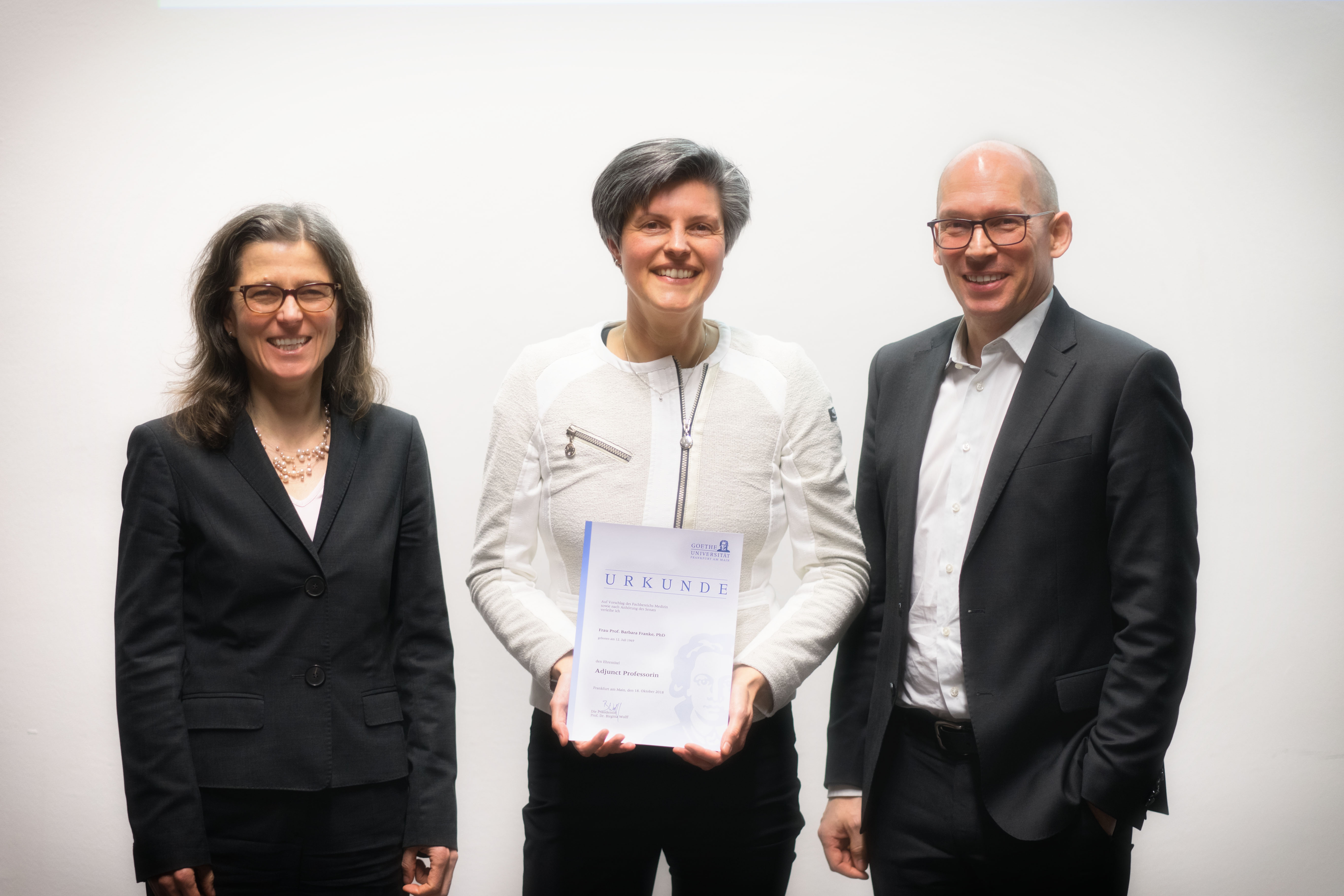 ADHD Awareness Month 2018 - Shine a light on ADHD (VIDEO)! The video was created by Laura Ghirardi, Nicoletta Adamo, Arjan de Brower, and a number of early career researchers from the MiND consortium; it was filmed and edited by the company "4QFilms". The project was supported by generous funds from the EU-Funded projects MiND, Aggressotype, CoCA and Eat2BeNICE. For further information please click here.

Nathalie Holz received the August-Homburger- Prize: (together with Eileen Weiß and Rebecca Brown) for her dissertation „Environmental scars: Neuroimaging study of the long-term consequences of early adversity on brain structure and function”. The price has been shared among all three female scientists.

ADHD-Europe - Young Adults Declaration: ADHD-Europe have launched a declaration about ADHD across the lifespan and the need of continued treatment.

Women in Science: Last 5th of July, both the Aggressotype and the CoCA projects were mentioned in the ‘Women in Neuroscience’ workshop at the 10th FENS Forum in Copenhagen, which we had the pleasure to attend. Different researchers from the field presented their personal experiences, either working to bring to light gender differences in science, promoting gender equality programs or as young researchers trying to reconcile work and family life. After their nice and encouraging talks, all the assistants had the opportunity to formulate their questions and/or comments, generating very productive debates. A lot of effort is still needed in science to reach gender equality, an issue that does not only affect women, and that involves much more than simply fighting against the gender bias in obtaining senior positions. This is a problem that affects all of us in the way we work on science and treat our partners. Several issues were addressed in the workshop that we were not aware of and that we think should be important to disseminate and discuss with our colleagues. For that purpose, we would like to propose a short talk and a mini-debate on gender equality in the next general assembly meetings of our EU projects that may contribute a bit to deal with this issues. Given the international character of our projects, we could address differences regarding gender policies among countries in research institutions. We consider that people working on the same project should share equal perspectives regardless of their sex, but also of their place of work. We thank the organization of the FENS meeting for this enriching and encouraging workshop.

We would like to inform you today that our SEAB Member Prof. Peter Propping passed away on April 26th 2016. The Aggressotype Consortium is very sad about the loss of a highly valued advisor and expert in the field of genetics and ethics. With great commitment, supported by his professional expertise and extensive experience, he has advised the Aggressotype consortium and was actively involved in our scientific discussions. Besides his professional expertise, he was a well appreciated person. We would like to extend our deepest condolences to his colleagues from the Institut für Humangenetik, Biomedizinisches Zentrum at the Universitätsklinikum Bonn. Our thoughts are with his family at this time.

Aggressotype researchers Latoria Williams gave an interview to ECNP in depth. ECNP in depth is a new initiative started in August 2015 with a series of interviews that ECNP is planning with key people in the field, looking at their work and what it says about the future of applied neuroscience.

Aggressotype coordinator Prof. Barbara Franke was invited by the patient organization ADHD-Europe to give a talk about collaboration between researchers and patient representatives at the ADHD-Europe Annual General Meeting in Brussels on February 27. The talk was well-received, and Prof. Franke was invited to become the first professional member of ADHD-Europe. Professional membership will be encouraged by the patient organization for mutual benefit to both researchers and patients - in this way research can be tuned optimally to the needs of patients.

Prof. Jonna Kuntsi form King's Collge London won the Kramer-Pollnow Prize 2016. The Kramer-Pollnow Prize (KPP) is a German prize for biological research in child and adolescent psychiatry and is announced Europe-wide for 2015. The KPP is awarded for scientific excellence in clinical research in biological child and adolescent psychiatry. Also empirical work related to the transitional period from adolescence to young adulthood is welcome. With regard to contents the relationship between biological and psychological/psychotherapeutic research is of special interest.

Aggressotype researchers founded the ECNP Network ADHD across Lifespan. This network aims at connecting researchers across disciplines to work on ADHD etiology across the entire period of life, removing the artificial split often introduced by the seperation of child and adolescent psychiatry from adult psychiatry into seperate medical disciplines and clinics. For further information please click here.

The Aggressotype researchers will participate in the 5th World Congress on ADHD which will be held from May 28th - 31st 2015 in Glasgow. For more detail on the congress please click here.

Besides that they will also be present at the 28th ECNP Congress which will be held from August 29th - September 1st in Amsterdam.

Direct links
This website uses cookies to improve your experience. We'll assume you're ok with this, but you can opt-out if you wish. Until you give your consent, only those cookies necessary to maintain the website's functionality are active. When you choose "OK", so called third-party non-functional cookies (e.g. GDPR-conform Google Analytics) may also become active. Please be aware that the website's functionality may be restricted if you choose "DECLINE". You can revoke your choice at any time by clearing your browser cache/history and updating your selection. Please also view our privacy policy.
Ok Decline