The Aggressotype consortium is dedicated to the best possible outreach into the scientific community and the wider public. Please find our news here. Enjoy reading!

In December 2017 an article called 'Lifting the red mist with research on aggression' has been published in the Horizone magazine. This article provides inside in the research of aggression and on Aggressotype in particular. Please click here to read the full article and also visit the Horizon Magazine website.

Prof. Barbara Franke from the Radboud University Medical Centre held a plenary lecture under the title “From genes to clinical phenotype in ADHD across the lifespan” at this year’s ECNP Congress in Paris.

During her talk, the coordinator of the Aggressotype project gave insights into her current research as well as related projects dealing with impulsivity, compulsivity and addictive behaviours, such as CoCA.

“Thanks to increased availability of big data as well as technological and methodological innovations, we are able to gain new insights into the genetic architecture of psychiatric disorders at an unprecedented pace”, Franke said. “The identified genes can then form the starting points for understanding the mechanisms underlying the disorders”, she summarized.

The annual ECNP Congress is one of Europe’s largest and most renowned scientific meetings for disease-oriented brain research. Attracting between 4,000 and 6,000 neuroscientists, psychiatrists, neurologists and psychologists from around the world, the congress, which celebrated its 30th anniversary in Paris in September 2017, is a major hub for cutting-edge scientific exchange in the field. Concentris was also present during this event in order to actively promote Aggressotype amond the participants.

Prof. Dr. Barbara Franke was invited to become a member of the Royal Netherlands Academy of Arts and Sciences (KNAW). The Academy is an organization dedicated to the advancement of science and literature in the Netherlands. In addition to various advisory and administrative functions it operates a number of research institutes and awards many prizes. The Academy is an important advisory organ to the Dutch government on scientific matters; it offers solicited and unsolicited advice to parliament, ministries, universities and research institutes, funding agencies, and international organizations. The members are appointed for life by co-optation. The acceptance criterion is delivered scientific achievements. The invitation to join KNAW comes only two months after Barbara Franke’s installation as an elected member at the second scientific Royal Society in The Netherlands, the Royal Holland Society of Sciences and Humanities (KHMW).

Prof. Barbara Franke presented a lecture on ADHD at the Annual Meeting of the American College of Neuropsychopharmacology (ACNP) in Miami, Florida, USA in December 2016

Prof. Barbara Franke was invited to present a lecture on ADHD at the Conference of the American Professional Society of ADHD and Related Disorders (APSARD) in Washington DC, in January 2017

First combined Early Career Scientist Workshop on Aggression (31.10. – 01.11.2016 in Nijmegen, The Netherlands) The Early Career Scientists had the chance to create a very informative and well organized meeting aiming to cover all aspects of aggression and aggression-related disorders but also state-of-the art research in this field. This was the first time that all Early Career Scientists form the four aggression-related EU funded research projects met in person in order to attend the workshop on aggression. This workshop was mainly organised by the MATRICS, Aggressotype and ACTION consortia but we were also extremely happy for all the support and help from the FemNAT-CD consortium. The workshop was attended by 40 young scientists with an equal distribution across the consortia. Over the two days, senior researchers from the four consortia dedicated their time to give state-of-the-art lectures, shining a light on the broad spectrum of aggression research ranging from diagnostics and therapy to genetics and neuroimaging. Further, all participants had the chance to present and discuss their own work in poster or short laptop presentations. Beyond the aspect of scientific content, the establishment of a personal scientific network was one of the core goals of the workshop. We wanted to increase the interaction between the consortia and even try to establish new collaborations for ongoing and future projects. According to all Early Career Scientists this workshop was a total success and the opinions that echoed back have stated that a repetition of this event would be fantastic. The program can be found here.

In Memory of Prof. Andrea Ludolph

In Memory of Prof. Andrea Ludolph

The Aggressotype researchers are deeply saddend about the loss of Prof. Andreas Ludolph. Her loss is difficult to understand and hard to accept. She was highly valued as a scientist and clinician, but also as a person, whose genuine interest and compassion for people shone through. Andrea was very dedicated to Aggressotype; only this March she organized a symposium for us at the Annual Congress of the German Society for Children and Adolescent Psychiatry (DGKJP). We have extented our deepest condolences to her colleagues from the Kinder- und Jugendpsychiatrie department in Ulm, and our thoughts are with her Family at this time.

On the 4th of March, Aggressotype researchers had the opportunity to present the plans and first findings of our multilevel research at the Congress of the German Society for Children and Adolescent Psychiatry (DGKJP), the largest German-spoken congress in this field. Chaired by Andrea Ludolph and Barbara Franke, the symposium with additional contributions from Andreas Reif, Sarah Hohmann and Katharina Ried was very well received by the over 200 clinicians and researchers in the audience.

Being effective from August 16th 2014, Prof. Andreas Reif has been appointed as being the Chair of Psychiatry at the University Hospital Frankfurt, Goethe University Frankfurt am Main. The Department of Psychiatry, Psychosomatics and Psychotherapy currently provides care for 152 inpatients and 32 day patients, as well as a large number of outpatients. There is a close collaboration with the Department of Child Psychiatry, and so Developmental Psychiatry will be a major clinical and research focus of the Psychiatric Department amongst affective disorders and psychoses. The University Hospital Frankfurt is ranked amongst the best clinics in Germany, while the Goethe University Frankfurt/Main is found amongst the Top 75 Universities worldwide in the last Shanghai ranking; most importantly, the neurosciences are amongst the major topics in research there. More information can be found online: http://www.psychiatrie.uni-frankfurt.de/

All the Symposia speakers are members of the Aggressotype consortium, and their presentations focused on different aspects of this collaborative effort. Barbara Franke provided an overview of the aims of the project, with emphasis on characterizing the differences and communalities of reactive impulsive and low emotional, instrumental subtypes of aggression. The possible role of specific genes, such as NOS1 and MAOA, in brain structure and function was discussed. Will Norton presented the zebrafish as a model organism for studying the etiology of aggression. Aggression can be reliably measured by recording stereotypic agonistic postures elicited when the animal is shown its own mirror image. A medium throughput screening of more than one hundred compounds will be performed by administering the drugs by immersion in the tank water, and their effects on fish behavior will be examined. Promising drugs will be validated in mouse aggression paradigms. Jeffrey Glennon presented work on mouse models of aggression, including the TPH2 -/- knockout and the BALB/Cj inbred strain. The resident intruder task, a well-established aggression paradigm, is being used. The aim is to identify neural markers and also epigenetic moderators of impulsive aggressive behavior, which have remained elusive so far. State-of-the-art MRI acquisition and analysis methods and microRNA sequencing will be applied. Finally, Tetyana Zayats focused on parent of origin effects (POE), an expression of genomic imprinting that is a source of genetic complexity in common neuropsychiatric conditions. Application of multinomial modeling may serve to better understand POE - and to establish a distinction from maternal effects- and will be used to examine over 3,000 trios with ADHD-affected offspring, where aggression can be a particular problem.

These were the titles of the presentations:

At an international meeting held by the Aggressotype Consortium in Mainz, Germany, researchers from King’s College and Imperial College London presented preliminary results from an on-going treatment study of ADHD in young male prisoners. 20% of the prisoners met clinical criteria for ADHD. After medical treatment with a long acting stimulant medication there was a large reduction in ADHD symptoms. Improvements with ability to focus attention, restless over activity and impulsive responding were accompanied by greater self-control of behaviour and ability to engage positively in educational and rehabilitation programs. Participants reported being less frustrated, irritable and angry, and there was a reduction in aggressive incidents.

Most young people with ADHD do not have problems with aggression. However, common psychiatric disorders such as depression and ADHD place young people at increased risk of developing aggression; especially where there is a lack of adequate recognition and support. Offenders with ADHD were often vulnerable as children due to problems with self-control, emotional instability and inattention. They are more likely to have experienced behavioural, emotional and peer problems at school and to have had difficulties coping with school. Our research suggests that treating ADHD in young adult offenders can make a difference by helping them to engage better with education and rehabilitation programs and improving self-control of behaviour. A report from independent prison inspectors found that “some prisoners [in the ADHD treatment program] to whom we spoke were experiencing some stability of behaviour for the first time in their lives”.  The researchers call for broader studies into the potential benefits of cost-effective social and health care pathways for the treatment of offenders with ADHD.

The Aggressotype Consortium held its yearly meeting from September 29 to October 1 in Mainz, Germany. Aggressotype is a large international consortium funded by the European Union consisting of 18 academic and 6 commercial partners. Aggressotype researchers aim to unravel the biological causes and mechanisms underlying aggression in ADHD and conduct disorder and also investigate how aggression can best be prevented and treated. In their stimulating 3-day meeting, the 60 researchers discussed the progress made during a successful first year of their 5-year project, with issues presented covering a wide range of disciplines. In addition to the presentation of the first results of the study in prisoners, a particular highlight was also the contribution of a representative of the European ADHD patient organization ADHD-Europe, who put out a plea for accurate communication by researchers in both scientific and popular press to avoid stigmatization of whole patient groups and to provide a clear guide to where resources are needed.

The filming of a video explaining the research aims and approaches of the Aggressotype Consortium to the general public, which will be placed on the website of the consortium (www.aggressotype.eu), was an additional item on the agenda for this meeting.

On June 23rd, a first Aggressotype symposium has been held at the CINP 2014 World Congress in Vancouver. Speakers (from left to right) include: Will Norton (University of Leicester, United Kingdom), Klaus-Peter Lesch (Maastricht University, The Netherlands), Barbara Franke (Radboudumc, The Netherlands), Andreas Reif (University Hospital of Wuerzburg, Germany). 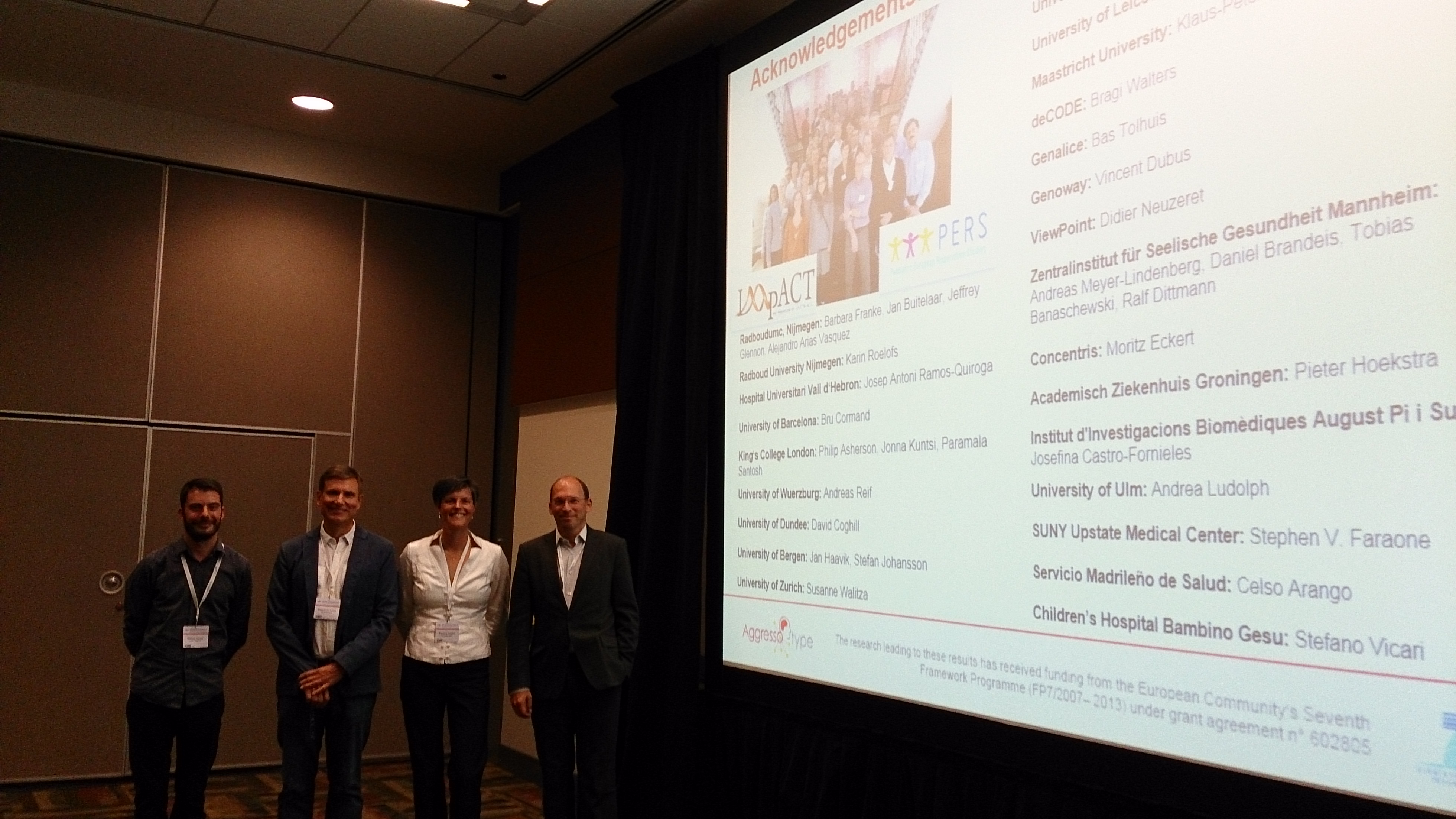 Direct links
This website uses cookies to improve your experience. We'll assume you're ok with this, but you can opt-out if you wish. Until you give your consent, only those cookies necessary to maintain the website's functionality are active. When you choose "OK", so called third-party non-functional cookies (e.g. GDPR-conform Google Analytics) may also become active. Please be aware that the website's functionality may be restricted if you choose "DECLINE". You can revoke your choice at any time by clearing your browser cache/history and updating your selection. Please also view our privacy policy.
Ok Decline